Wow, love these graphics, pretty original! "Pretty much every kid loves playing with cardboard boxes. Taiwanese photographer and graphic designer Sydney Sie never stopped playing with them. Her series “Unexpectable Boxes” captures the essence of our childhood pretending in surprising and surreal photographs. In bold candy colors, her images reveal her subjects’ faces, fingers and feet peeking out of holes in artificial spaces built by Sie. It’s an optical illusion achieved by a very simple technique of colored papers and boards colored like boxes, which a model then stretches into. In her artist statement, Sie explains the significance of her boxes: “This hole is the only clue from inner and outside, where we see the world from ellipse to square… The mystery is when we want to get more but instead, they are getting far and far away. We follow the path to hide under hiding. Desire is not the end of story but also the necessary to struggle before having it....” More here: http://hifructose.com/2015/09/24/sydney-sies-surprising-and-surreal-unexpectable-boxes/
Geplaatst door Cindrea Limburg op Monday, September 28, 2015
Email ThisBlogThis!Share to TwitterShare to FacebookShare to Pinterest
Labels: Boxes, Graphic Design, Sydney Sie, Taiwan

I Spy With My Little Eye - The PetBot Makes Selfies of Your Pets! 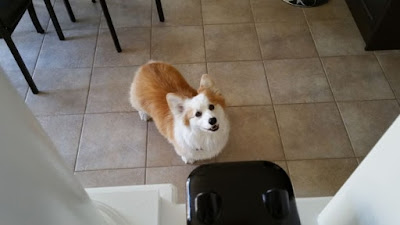 It's weeeeeekend ....so finally we're around our beloved pets ALL day the coming few days. I love having my dog Farah around me all day. But for when we start on Monday: here's something cute you could think about: treating yourself with a pet selfie. "Pet owners often wonder what their furry friends do when they’re unsupervised all day. It’s even the subject of a new animated film. That question takes on a special urgency in close urban quarters. Is my dog barking so loudly that the downstairs neighbors can hear? Does my cat start clawing at the couch when it gets spooked by a noise outside?
What if you could know exactly what your pet is doing while you’re at the office or grabbing drinks with a friend?That’s the idea behind PetBot, a cube-like device that allows you to check up on your pet while you’re on the go. Equipped with a camera and facial recognition software, PetBot detects whenever your animal moseys in front of the lens. This prompts it to emit a few sounds to grab your pet’s attention and encourage it to move towards the camera. Once your pet is close enough, PetBot is able to capture a brief video, and even dispense a treat." Sweet, right? More here: http://www.citylab.com/navigator/2015/09/how-to-spy-on-your-pet-at-home/407077/?utm_source=SFFB
Geplaatst door Cindrea Limburg op Friday, September 25, 2015
Email ThisBlogThis!Share to TwitterShare to FacebookShare to Pinterest
Labels: gadget, Marketing, Pets, Selfie, Work

How the Brits Go Dutch : They Call it Mini-Holland 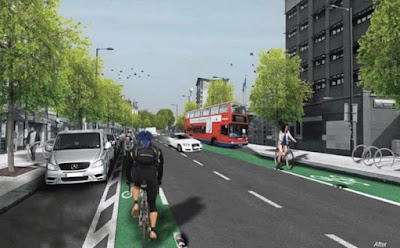 Ha, read this this morning. I already knew the Brits have always been interested in our (Dutch) way of city planning and more specifically our bike lanes. There's a new term: Mini-Holland....LOVE it! "
If imitation is the sincerest form of flattery, then the Dutch should be pretty pleased with recent plans underway in London.Right now, the city is remodeling three new zones it’s calling “Mini-Hollands”—cycle- and pedestrian-friendly neighborhoods that it hopes will act as flagships for the transformation of the rest of London. Introducing properly segregated cycle lanes, more pedestrian areas, and traffic-calming measures in ways that reflect long established Dutch practices, these zones secured up to £100 million ($155 million) in funding from Transport for London last year. This summer and fall, the first parts of the zones are being officially launched.
The plans are part of a brightening picture across London. It seems that when it comes to cyclist and pedestrian safety, the city is finally getting itself together.
Various plans across the new zones show the Mini-Holland process in action. New bike lanes are laid out with some segregation from cars. In the best places, this means a separating curb, though some may have to make do with a line of bollards. Key junctions get carefully arranged so cyclists no longer have to turn into busy traffic or tackle blind corners." More here: http://www.citylab.com/cityfixer/2015/09/london-is-calling-its-new-pedestrian-and-bike-friendly-zones-mini-hollands/406702/?utm_source=SFFB
Geplaatst door Cindrea Limburg op Wednesday, September 23, 2015
Email ThisBlogThis!Share to TwitterShare to FacebookShare to Pinterest
Labels: Britain, Brits, City Mapping, City Marketing, Dutch, Holland, Mini-Holland

The Big Secret of Artists!

Love comics. Saw this one in
Hyperallergic. So cute! 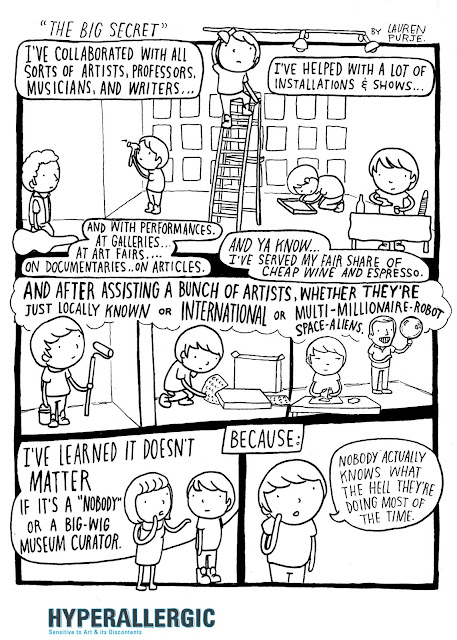 Inspiration of the Day : Yayoi Kusama’s Cosmic “In Infinity” 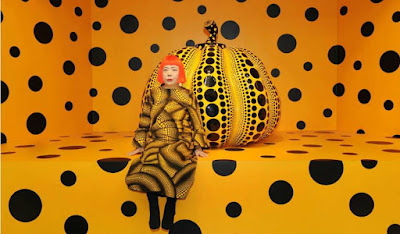 I love the Danes..thanks to all those awesome Danish detectives I learned a little bit of Danish myself. It actually sounds a lot like Dutch and German, Sam arbeit for instance means 'working together'...if I am correct.....and this picture here is my inspiration of the day. "“In Infinity” at Denmark’s Louisiana Museum of Modern Art is the first comprehensive retrospective exhibition in Scandinavia of the work of pioneering Japanese-born artist Yayoi Kusama whose distinct visual vocabulary of psychedelic, colourful, riotously spreading patterns has earned her a position as one of the most innovative and unique artists working today.“In Infinity” is a chronological showcase of 86-year-old Kusama’s entire six decade-long career that unfolds over a series of thematic sectors focusing on key moments of radical innovation in her work. One of the overarching themes is Kusama’s fascination with infinity, which “in her work is a spiritual idea, a cosmological space, and a psychological abyss,” according to the Louisiana." I'm a big fan of Kusama myself and I just love how she blends concepts and creates these most appealing pieces of installation/decor art.
- See more at: http://ende.blouinartinfo.com/news/story/1237358/yayoi-kusamas-cosmic-in-infinity-retrospective-in-denmark#sthash.hXJpQpn8.Un1HYNyX.dpuf
Geplaatst door Cindrea Limburg op Wednesday, September 16, 2015
Email ThisBlogThis!Share to TwitterShare to FacebookShare to Pinterest
Labels: Artist, Danish, Denmark, Japan, Japanese, Louisiana Museum of Modern Art, Yayoi Kusama’s

Artist of the Month : Grems from France! 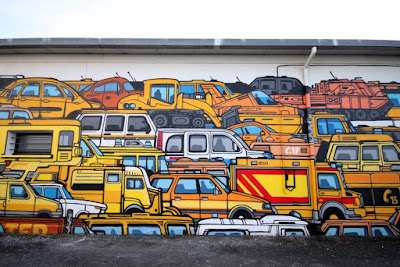 Been following Grems for a couple of years now, always totally amazed by his skills. His 'real-life' name is Michaël Eveneo and he gives himself the titels: Directeur artistique, illustrateur and street art and he has done projects with big brands like Nike, but has also gained a lot of attention in the music industry as a album cover creator as well as concert wall illustrations. I love this photo right here. More info on his page: http://www.gremsindustry.com/
Geplaatst door Cindrea Limburg op Saturday, September 12, 2015
Email ThisBlogThis!Share to TwitterShare to FacebookShare to Pinterest
Labels: Art, Artist, France, Grem, Illustrator, Michaël Eveneo, Street Art 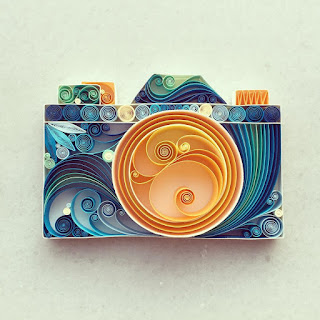 Love the designs! "Istanbul-based artist Sena Runa first explored the craft of paper quilling three years ago while looking for a hobby to fill her spare time. Runa quickly discovered a talent for color and composition when working with paper and it wasn’t long before she began selling pieces online. Her distinct quilling style developed so rapidly she was soon able to quit her job in HR to pursue the craft as a full-time endeavor earlier this year. You can see more of her work on Facebook. (via My Modern Met, All Things Paper)". More here: http://www.thisiscolossal.com/2015/09/colorful-quilled-paper-designs-by-sena-runa/
Geplaatst door Cindrea Limburg op Wednesday, September 09, 2015
Email ThisBlogThis!Share to TwitterShare to FacebookShare to Pinterest
Labels: Design, Istanbul, Paper, Paperart, Sena Runa, Turkey

Bikes, Art and Marketing - The Minneapolis Institute of Arts 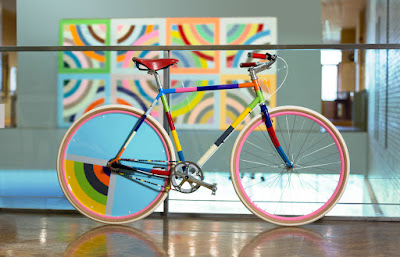 These look fantastic and what a great idea! "To celebrate their 100th birthday, the Minneapolis Institute of Arts (MIA) teamed up with Handsome Cycles to create three different bicycles customized to look like famous paintings from the MIA. Bike #1 was inspired by Hans Ledwinka’s Tatra’s 1948  T-87 four door sedan. Taking cues from the car’s smooth, curvy lines and striking front lights, the bike as a front hub dynamo powered classic front light, honey saddle, and matching cognac-colored bar tape. Bike #2 features delicate brush strokes and the colors of the golden fields in France. Inspired by Claude Monet’s Grainstack, Sun in the Mist painting, this bike is all about maintaining a delicacy that’s found in Monet’s art. The frame of the bike is simple to exemplify the rural and natural feel. Graphic shapes and bold colors characterize Bike #3 (featured photo), which gives nod to the 1969 Frank Stella, Tahkt-i-Sulayman, Variation II. To capture the essence of the painting, this bike’s motto is “What you see is what you get.” Everything is out on display and nothing is hidden. Simple yet bright, it’s the most playful of all the bikes." I've selected my favorite bike over here, bike #3! Want to see more: http://design-milk.com/art-meets-transport-stylish-bikes-inspired-works-art/
Geplaatst door Cindrea Limburg op Sunday, September 06, 2015
Email ThisBlogThis!Share to TwitterShare to FacebookShare to Pinterest
Labels: Art, Bikes, Handsome Cycles, Marketing, Minneapolis Art Institute

The New Kind of Art - with Textile! 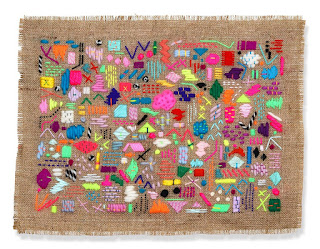 Stitching...handcrafts...craftmanship....it's all back in the game when it comes to art. "I discovered UK-based Elizabeth Pawle’s creative stitchings on Instagram and was immediately hooked on her use of bright colors and unique textures. Using wool, cotton, silk and acrylic stitched in abstract patterns onto natural hessian, she creates a kind of anti-sampler. I love how every time you look at one of them, you discover something new." Cute, right? More here: http://design-milk.com/textile-art-by-elizabeth-pawle/?utm_source=dlvr.it&utm_medium=facebook
Geplaatst door Cindrea Limburg op Tuesday, September 01, 2015
Email ThisBlogThis!Share to TwitterShare to FacebookShare to Pinterest
Labels: Art, Craftmanship, Elizabeth Pawle, Stitching, Trends, UK
Newer Posts Older Posts Home
Subscribe to: Posts (Atom)