Self Driving Pods ~ It's a THING Now! 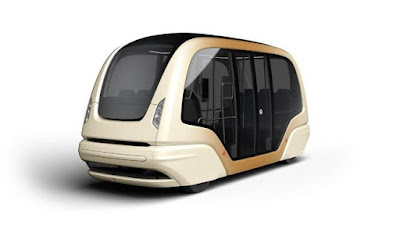 It's in the newspapers, so it's a 'thing' now and I kind of like it. It is so funny that this source I am going to quote does not mention it's a Dutch company, based here in Utrecht, that cooperated with the Italian company Zagato while working on the realisation of these cute pods. "By 2017, citizens in Singapore will be able to commute by way of autonomous pods. Created in collaboration between driverless vehicle manufacturer 2getthere and the Singaporean transportation operator SMRT, the electric commuter cars will help transport up to 8,000 people per hour in one direction. There are 24 pods set to begin operation by the end of the year. Head to Mashable to watch them in action." Here's a link to the Dutch newspaper De Volkskrant where you'll find more info about 2getthere.
Geplaatst door Cindrea Limburg op Tuesday, April 26, 2016
Email ThisBlogThis!Share to TwitterShare to FacebookShare to Pinterest
Labels: 2getthere, automotive, cross-over, future, future design, italy, pods, Singapore, smart city, SMRT, Utrecht, Zagato 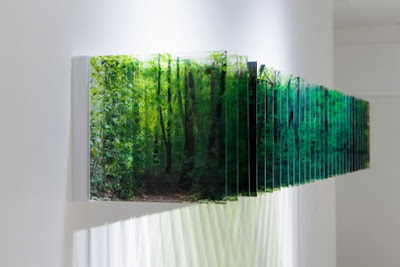 Oh this is SO something I just NEED in my officespace. I am such a 'tree girl', can't live without the trees so to speak...and feel. So this one would do me just fine. Quoting from a Dutch source: "The remarkable artist Nobuhiro Nakanishi specialized in a broad range of media and techniques, he keeps exploring materials. For this series Nobuhiro Nakanishi made photos of woods and clouds during a long period in time which he later on pressed into acrylic pannels. The pannels were placed in chronological order next to each other, creating this unique installation". You can find more info here!
Geplaatst door Cindrea Limburg op Wednesday, April 20, 2016
Email ThisBlogThis!Share to TwitterShare to FacebookShare to Pinterest
Labels: Art, Japan, Media & Art, Nobuhiro Nakanishi 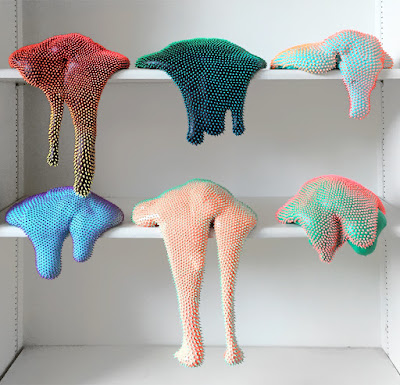 Crazy about these! "artist dan lam has formed a series of vibrant, free-standing ‘drippy sculptures’ that resemble exotic organic matter seemingly sourced from another planet. placed on shelves or mounted on walls, the neon-hued artworks form elongated, stretched shapes that ooze off the edges of these surfaces. the sculptural blobs are covered in skin of hard spikes — gradating in color and size — that wrap around the curvaceous anatomy of each object.
from her studio in dallas, lam begins by sculpting polyurethane foam on top of a metal framework. these first compositions are informed by motifs and geometries found throughout the human body, flesh, foods and nature. while lam begins with a loose idea of the sculpture’s physical structure, the unpredictable nature of the foam generates unexpected outcomes guided by gravity, causing the material to form drippy deposits as it settles. the artist then adds many layers of acrylic paint and occasionally resin, depending on the desired finish — matte or gloss."
Geplaatst door Cindrea Limburg op Monday, April 18, 2016
Email ThisBlogThis!Share to TwitterShare to FacebookShare to Pinterest
Labels: Artist, Dallas, dan lam, Sculptures, USA 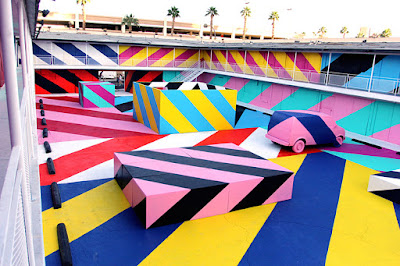 Oh love this! These kind of visuals always do well in city marketing, I remember this concept was used in Paris. "artist maser — originally from dublin, and now based in the USA — began painting graffiti on the streets of ireland in 1995, eventually going on to establish himself as one the country’s leading creatives working in the urban realm. while his early work was strongly in influenced by typography and sign painting, maser’s unique style gradually progressed towards graphic representation and geometric abstraction, emphasizing the simplicity of form. his work can be seen on walls and doorways across the world, including austria, belgium, france, slovenia, spain and the UK. most recently, maser has explored new mediums, extending his work from walls to canvases, video and large scale installations. From april 8, 2016 to may 5, 2016, lazarides rathbone presents an exhibition of the artist’s new works titled ‘orbiting on the periphery’. ahead of the opening, we spoke with maser about his background and upbringing, artistic influences, and the current fascinations feeding into his creative work." Read more here.
Geplaatst door Cindrea Limburg op Wednesday, April 06, 2016
Email ThisBlogThis!Share to TwitterShare to FacebookShare to Pinterest
Labels: Artist, Dublin, Grafitti, maser, Street Art, USA
Newer Posts Older Posts Home
Subscribe to: Posts (Atom)