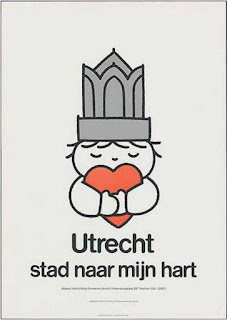 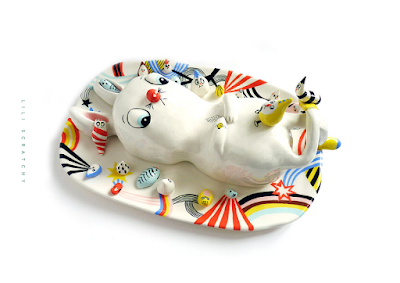 Saw this on the Jealous Curator page. Ceramics by Lily Scratchy...it's cute right? The page didn't mention a lot about the artist...and there wasn't anything really written about her online that I could find, but here's her Flickr site with lots of fabulous creative projects.
Geplaatst door Cindrea Limburg op Saturday, October 24, 2015
Email ThisBlogThis!Share to TwitterShare to FacebookShare to Pinterest
Labels: Ceramics, Flickr, Lily Scratchy, The Jealous Curator 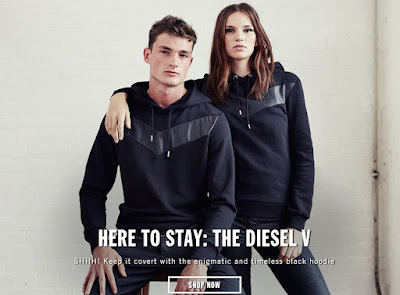 Wrote about this new gender neutral trend in September, here's Retail brand Diesel and how they give a twist to this approach. Read the slogan: "GENDER NEUTRALITY TODAY REPRESENTS
A GESTURE OF LIBERALISM AND CREATIVITY”...So just what makes the latest expression of gender neutrality any different from Katherine Hepburn in a smoking jacket and the many other fads that have come before? Well, this is a trend that extends far beyond clothes (and even accessories). Recent developments include the opening of a gender-neutral toy kingdom in Harrods, the creation of a new personal pronoun by the Swedes, and the opportunity to run into a senior member of state in the White House unisex. For parents-to-be, yellow is the only colour to paint a nursery this autumn. Why? Perhaps because gender feels like an increasingly lazy, over simplified and, let’s face it, artificial way of identifying yourself. And that’s not to get started on the negative effect of society that puts people in boxes and asks them to stay in them. Gender neutrality today represents a gesture of liberalism and creativity. Because when Personal Expression is King, the loo you use is by the bye – it’s the kind of individual you are that counts." More here: http://store.diesel.com/magazine/en/stories/gender-neutral-4/?ecmp=FW15_Main-Core_SNS_Facebook-organic_image_unisex_global_apparel
Geplaatst door Cindrea Limburg op Saturday, October 17, 2015
Email ThisBlogThis!Share to TwitterShare to FacebookShare to Pinterest
Labels: Diesel, Gender Neutral, Marketing Campaign, Retail 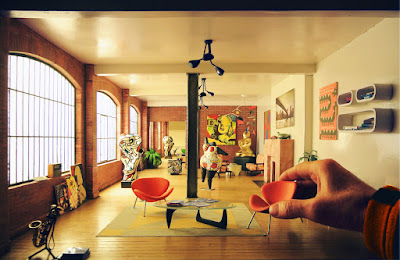 'Let's GO!', wrote one of my girlfriends when I showed her a piece on a museum in France : "Housed in a 16th century building in the historic center of Lyon, France is the Musée Miniature et Cinéma, a 5-story museum containing over 100 miniature film sets. The tiny scenes were produced by world-renowned miniaturists and contain the highest form of Hyperrealism in order to trick the audience’s eye into believing each set was indeed life-size.
The handcrafted models contain all the minuscule features that would be found in the film’s actual scene, from fake mold inhabiting peeling walls to scratches seen behind tiny bedposts. The props in the museum’s scenes are also placed with incredible accuracy, disheveled books in libraries propped against each other at just the right angle, and miniature Charles Eames chairs that would even fool the designer. Accurate within these scenes is also their relationship to outside light, windows accentuating or distilling the light to position the set in the right time of day, geographic location or season.“The subtle lighting arrangement, the painstaking replication of old textures, the use of the same original materials, all contribute to the creation of a moving poetry that resonates with each new miniature panorama,” explains the museum’s website." I would LOVE to GO Christine ;-)! See more here: http://www.thisiscolossal.com/2015/10/miniature-film-set-museum/
Geplaatst door Cindrea Limburg op Wednesday, October 14, 2015
Email ThisBlogThis!Share to TwitterShare to FacebookShare to Pinterest
Labels: Charles Eames, France, Hyperrealism, Lyon, Miniature, Musée Miniature et Cinema, Museum Marketing

The Power of Social Media: The Case of Reebok and Female Fighting

I was just talking about female fighter and UFC champ Ronda Rousey with a friend yesterday and how I love to watch female fighting matches. Ronda gained a lot of attention the last few months and here is how Reebok commercialized this. Reebok gained most support through Instagram, Facebook's algorithm changes creates a miniscule reach for many brands: "This month, Reebok announced a new social campaign. The athletic-wear company asked fans to send messages of support for UFC champ Ronda Rousey to @Reebok with #MoreThanTape, that will be printed on handwraps to be given to her before her next fight.And the campaign, created by Venables Bell & Partners, has already gotten millions of impressions. The Instagram post announcing the campaign was Reebok’s top post in the past quarter, with almost 14,000 likes.It’s a far cry from a few years ago, when Reebok’s biggest problem was a hodgepodge of social media channels from different country and market managers. There were almost 600 social media accounts for Reebok, many of them fan-created, with no control by the brand. And there was no concerted effort to take advantage of social media’s relationship-building potential." Here's how they channeled their campaign through Instagram: "Instead, Reebok has focused heavily on Instagram. It has 530,000 Instagram likes on its main @Reebok channel. The brand joins many other social brands that have found serious uptake on Instagram, thanks to hard-core users who are there for the photos. Blakesley divided Reebok’s Instagram community into three channels: “classic,” “women’s” and “brand community.” His favorite right now is women’s, which focuses on in-the-moment lifestyle imagery and tie-ins with specific sports events such as Crossfit championships, Spartan Races or the UFC." More here: http://digiday.com/brands/reebok-got-8000-percent-growth-social-media-18-months/
Geplaatst door Cindrea Limburg op Sunday, October 11, 2015
Email ThisBlogThis!Share to TwitterShare to FacebookShare to Pinterest
Labels: Impact, Instagram, Marketing Campaign, Reebok, Ronda Rousey, social media 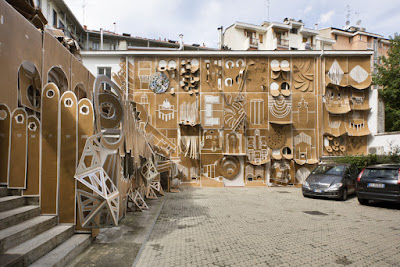 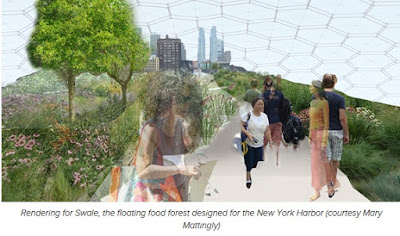 Floating and mobile cities, gardens, hotels...it's all hot topic. Now New York came up with this: "
New York City was once identified as much by tall ships as tall buildings — Walt Whitman celebrated it in his “Manhatta” (1860) as “The beautiful city, the city of hurried and sparkling waters! / the city of spires and masts!” Today it is a city that mostly looks inward, away from the shores, despite the public space opportunities of its harbor and rivers. Artist Mary Mattingly is interested in encouraging more public interaction with the waterways in her new project “Swale.” Planned to launch in spring of next year, it is an “itinerant food forest” floating on an island of repurposed shipping containers.“It’s important for this project to function in public space,” Mattingly told Hyperallergic. “Public space in New York is very limited, so in this case we are working towards creating more access to a public space that has limited accessibility.”"...This part is interesting: "The shipping containers intended to form the vessel are from the Port of New York and New Jersey, so reuse is built into the structure as well as its function. By promoting thought on independent food sources, Mattingly hopes visitors can consider “experimental zones that can be both interdependent and autonomous.” And if it were permanent, she suggests that the waterway-fed vegetation grown perennially could support any number of small-scale industries from medicinal plants to mushrooms." More here: http://hyperallergic.com/239367/mobile-food-forest-to-float-the-nyc-waterways-in-spring-2016/
Geplaatst door Cindrea Limburg op Saturday, October 03, 2015
Email ThisBlogThis!Share to TwitterShare to FacebookShare to Pinterest
Labels: City, City Marketing, Floating, Forest, Garden, New York, Urban Planning
Newer Posts Older Posts Home
Subscribe to: Posts (Atom)